Join us for First Unity’s special Sunday service music for the month of August, 2022, featuring performances by leading members of the St. Louis musical community. August’s schedule is as follows:

With his powerful voice and commanding stage presence, baritone Jacob Lassetter enjoys an exciting and vibrant career on both the operatic and concert stage. Critics have praised his dignified characterizations, his soaring high range, and his deep, rich tone quality.

In 2021 Mr. Lassetter makes his company and role debut as Scarpia in Tosca with Marble City Opera. Later in 2021 he makes another company debut as Sharpless in Madama Butterfly with Painted Sky Opera, where he will return in 2022 for his role debut as Tonio in I pagliacci. The 2021–2022 season also brings Mr. Lassetter to the recital stage for fall and spring recitals at Webster University, and to the concert stage for a season preview concert with Union Avenue Opera. Earlier in the 2020–2021 season he sang benefit concerts for both Winter Opera Saint Louis and Union Avenue Opera. Mr. Lassetter was scheduled to make his role and company debut as the title role in Der fliegende Holländer with Mid Ohio Opera, as well as a return to Italy for performances of the title role in Elijah, as soloist for Mozart’s Mass in C Minor, and various other concerts. These engagements were all unfortunately cancelled due to COVID-19.

In the 2019–2020 season Mr. Lassetter sang Sonora in La fanciulla del West with Winter Opera Saint Louis, and both Schubert’s Winterreise and Argento’s The Andrée Expedition in recital. In the 2018–2019 season he sang Dr. Falke in Die Fledermaus with Winter Opera Saint Louis, Carmina Burana with the Washington University Symphony Orchestra, Verdi’s Requiem and A Symphony of Toys with The Missouri Symphony, Dick Deadeye in H.M.S. Pinafore and Il Gran Sacerdote in Nabucco with Union Avenue Opera, and a series of three recitals with St. Louis Art Song.

Opera audiences have recently seen Mr. Lassetter as Sharpless in Madama Butterfly with Annapolis Opera, Wolfram in Tannhäuser with Apotheosis Opera (New York City,) Peter in Hänsel und Gretel with Union Avenue Opera, and Rodrigo in the world premiere of Borgia Infami with Winter Opera Saint Louis. Concert performances include Schubert’s Mass in A-Flat at Carnegie Hall, Mendelssohn’s Elijah in Robbiate, Italy, Beethoven’s Symphony no. 9 at the University of Wisconsin – Stevens Point, Haydn’s Lord Nelson Mass with the Bach Chamber Players of Saint Paul, Bach’s Mass in B Minor with the Rochester Choral Arts Ensemble, and a recital on the Shepley Concert Series at Christ Church Cathedral (Saint Louis.)

Mr. Lassetter’s additional operatic credits include Germont in La traviata (including his Italian debut in Castelfranco Veneto,) Michele in Il tabarro, the title roles in Don Giovanni and Le nozze di Figaro, Enrico in Lucia di Lammermoor, Horace Tabor in The Ballad of Baby Doe, Don Alfonso in Cosi fan tutte, and Griswold in Argento’s The Voyage of Edgar Allan Poe. Other concert credits include Walton’s Belshazzar’s Feast, Mozart’s Requiem, Handel’s Messiah, and Bach’s St. John Passion and St. Matthew Passion. He has earned critical acclaim for Orff’s Carmina Burana, including a performance at Orchestra Hall in Chicago, where he also sang Fauré’s Requiem. A frequent recitalist, he made his debut at New York City’s Carnegie Hall in 2008 alongside his wife, soprano Karen Kanakis.

A recent Finalist in the National Opera Association Vocal Competition, Mr. Lassetter has been a Semi-finalist in the Marguerite McCammon Voice Competition, a Regional Finalist in the National Association of Teachers of Singing Artist Award Competition, and received the Encouragement Award from the Southern Ohio District of The Metropolitan Opera National Council Auditions. He is an alumnus of the Young Artist Programs of Chautauqua Opera, Des Moines Metro Opera, and Utah Festival Opera, and holds degrees from Louisiana State University, The University of North Texas, and the University of Cincinnati College-Conservatory of Music.

Dr. Ruth Price, an accomplished performer, teacher, and clinician, teaches piano at Webster University in Saint Louis. In addition to maintaining an active private studio, she is an avid researcher and writer on the subject of piano music, specializing in performers’ analysis. Her book, Right Before Your Eyes: A Fresh Approach to Interpreting a Piano Score, was released in August 2015. Her innovative presentations on behind-the-scenes aspects of music and performance inspire teachers, students, and general audiences.  She also enjoys creating interdisciplinary arts experiences, collaborating with painters and art historians, and pairing classical music with children’s books. Price holds a doctorate in piano performance from the State University of New York at Stony Brook, and a Master’s degree from Indiana University. Her playing has been described by The Boston Globe as “…never less than first class and a balm to the ears.”

Soprano Karen Knakis is hailed for her fine vocal technique and dramatic flair. Her bright-timbered, powerful voice conveys rich emotion, displays brilliant agility, and soars to a thrilling high extension, making her ideal in both the bel canto repertoire and that of the Italian spinto soprano, particularly Verdi. “Her voice and her stage presence are a delight,” wrote a critic of her performance as Sybil in the world premiere of Hans Schaeuble’s Dorian Gray.

In March of 2020, Ms. Kanakis made her role debut as Minnie in Puccini’s La Fanciulla del West with Winter Opera Saint Louis. Her 2018-2019 season included performances of Rosaline in Die Fledermaus with Winter Opera Saint Louis, soprano soloist in the Verdi Requiem with the Missouri Symphony, Anna in Nabucco with Union Avenue Opera, soprano soloist in the Missouri Symphony annual holiday concert, “A Symphony of Toys”, and a series of recitals in Missouri and Illinois sponsored by St. Louis Art Song. Previous operatic credits include Giorgetta in Il Tabarro, Alice Ford in Falstaff, Donna Elvira in Don Giovanni, Countess Almaviva in Le Nozze di Figaro, and Violetta in La Traviata.

Ms. Kanakis has been a featured soloist with symphony organizations performing the Verdi Requiem, Mendelssohn’s Elijah, Brahms’ Ein Deutches Requiem,  Haydn’s Lord Nelson Mass, Handel’s Messiah, the Mozart Requiem, and Faure Requiem (at Chicago’s Orchestra Hall),, and Orff’s Carmina Burana. She is a frequently sought-after solo recitalist, and made her Caqrnegie Hall debut in the Weill Recital Hall in a joint recital program with her husband, baritone Jacob Lassetter. An enthusiastic performer of modern compositions, she was the American Tourist in the 2017 World Premiere of Borgia Infami, Ingram in Eric Chaslow’s The Puzzlemaster, and can be heard on American composer Brooke Joyce’s CD “Waves of Stone” on the Innova label.

A District Winner and Region Finalist in the Metropolitan Opera National Council Auditions, Ms. Kanakis performed as an Apprentice Artist with both the Des Moines Metro Opera and the Utah Festival Opera Company, where she was featured soloist on many orchestral concerts and on a “Music and the Spoken Word” television broadcast performing “Hear ye, Israel” from Elijah at the Salt Lake City Mormon Tabernacle.

Dr. Ruth Price, an accomplished performer, teacher, and clinician, teaches piano at Webster University in Saint Louis. In addition to maintaining an active private studio, she is an avid researcher and writer on the subject of piano music, specializing in performers’ analysis. Her book, Right Before Your Eyes: A Fresh Approach to Interpreting a Piano Score, was released in August 2015. Her innovative presentations on behind-the-scenes aspects of music and performance inspire teachers, students, and general audiences.  She also enjoys creating interdisciplinary arts experiences, collaborating with painters and art historians, and pairing classical music with children’s books. Price holds a doctorate in piano performance from the State University of New York at Stony Brook, and a Master’s degree from Indiana University. Her playing has been described by The Boston Globe as “…never less than first class and a balm to the ears.”

Deborah Sharn has been singing in St. Louis for many years and is a guest vocalist at various places of worship each Sunday. She is also an actress who has worked with the Black Rep, New Line Theatre, The New Jewish Theatre, and the Mustard Seed Theatre. Winner of two JUDY Awards, Deborah has performed her cabaret show, “An Evening With Deborah Sharn,” several times at the Kranzberg Art Center to sold-out audiences.  By day, Deborah is the Company Manager for The Repertory Theatre of St. Louis.

Steve Schenkel is the guitarist and orchestra manager for the Fox Theater, guitarist for the Muny Opera and the St. Louis Symphony, and a freelance jazz musician. Steve has a Ph.D. in Music from Washington University and a Master’s Degree in Religious Studies from Webster University where he served as an Adjunct Professor of Religious Studies for 16 years. He recently retired after 37 years at Webster University, where he founded the Jazz Studies program, the Webster Jazz Concert Series, and the Jazz Studies/Music Technology program. He taught music, media, and religion since 1980 and is now a professor emeritus.  His music is heard nationally on the PBS program “Breaking Bread,” as well as by millions of visitors each year in the multimedia show under the Gateway Arch.  Steve now serves as the Music Director for First Unity Church of St. Louis. 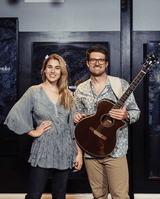 Originally from Cleveland and a Saint Louisan since 2010, 19-year-old Joanna Serenko has been exploring her outlets for pursuing her passion from a young age. She has been involved in JazzU., Sofar Sounds performances, won first place in St. Louis Teen Talent Competition, and in February, 2020, she wowed all four judges during the season premiere of NBC’s “The Voice”. About her experience singing on national television, Joanna says, “This show has given me a whole new confidence. It’s taught me that I could make it in the music industry. I would love to get a scholarship to study music. My opportunities for education are still something I’m working through. Everyone’s path is different, but no matter where I end up, I’m always going to be in music.” Her most recent release, “Best of Me”, is available on all major streaming services.

Guitarist Tyler Dale is a graduate of Southern Illinois at Edwardsville. His most recent recording, “Last Goodbye”, is available on all major streaming services.