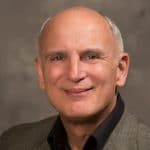 In that role, he arranges for various guest musicians, singers, and groups to be with us for Sunday Services.  In addition, he and Deborah Sharn will still perform one week per month, and Steve will also play the guitar periodically.  Steve has a Ph.D in Music from Washington University and a Masters Degree in Religious Studies from Webster University where he has served as an Adjunct Professor of Religious Studies for 16 years.  Dr. Schenkel founded the Jazz Studies program and the Jazz Concert Series at Webster University where he has taught music, media, and religion since 1980 and is now a professor emeritus.  His music is heard nationally on the PBS program “Breaking Bread,” as well as by millions of visitors each year in the multimedia show under the Gateway Arch.   Steve works at The Fox Theater as Orchestra Manager and plays for the Muny.  He has also played for the Opera Theater of St. Louis and worked with The Rep and St. Louis Symphony.  This puts him in touch with hundreds of area vocalists and musicians in the St. Louis area.